The RAIN programme manager, John Jukes, took some moments off from spreadsheets and enthusiastically coordinating team RAIN to take part in the COVID vaccine trial. He recounts his experiences here. 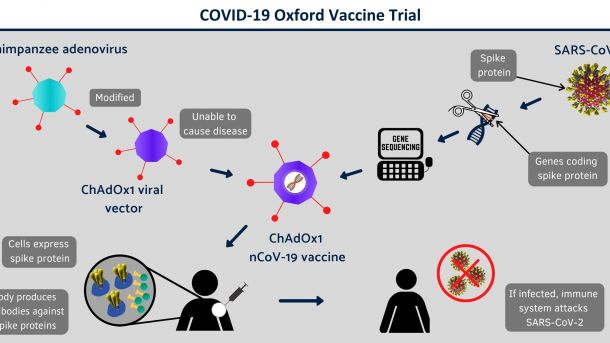 Most stories that start on April 1st tend to be proved a work of fiction by midday, according to the rules of April Fools Day…

Screening
On 1st April I attended the screening visit for the COVID-19 vaccine trial. The double-glass doors automatically slid open to the medical centre reception, and the unique ‘zero’ smell of a clinical environment was revealed. Inside was a reception desk, with hazard warning tape on the floor marking the boundary for those speaking with the receptionist. To the side were a small collection of chairs, each spaced 2-metres apart. This was my first experience of 2-metre distancing.

Soon I was led, along with another two volunteers, to a meeting room in which we would view the introductory video. Led by our escort it seemed to be an odd, socially-distanced, conga line.
They didn’t laugh at that joke either.

Again, another room with 2-metre spaced chairs, and a masked lady sat at the front of the room. Shortly, the video began. It was delightfully informative. It gave an overview of the trial; the cutting-edge techniques employed to create the test vaccine, the fact that you would receive a vaccine (either the COVID or Meningitis vaccine), the fact that this was the first in-human trials and the potential risks involved. One of them involved rapid hospitalisation – that didn’t sound so fun. But, we were assured, if it were to happen it would happen quickly so they could help. I’m not sure whether that was reassuring.

We were then escorted to separate clinic rooms, in which were three medical staff. All masked. All seemingly friendly; it’s difficult to tell on first impression when you can’t see a smile.
I was led through each of the questions to see whether I was eligible and if I wanted to participate. They took basic medical measurements and checked for any immediate health concerns. They also took some blood. That was fun.

And that was it.

I had to wait and find out if I would be eligible to take part.

On 21st April the message came through that I was officially enrolled, with a schedule of visits. The first would be at the end of April.

27th April and the first visit. The plan would be to have basic checks done (blood pressure, heart rate, temperature) then have some pre-vaccine blood taken, then have the vaccine. As it turned out, I decided to have my very first ever fainting experience while having the pre-vaccine blood taken. That was nice. It was so much fun, that after waking up and hearing some guy who had now appeared next to the reclined medical chair saying ‘I’m Gavin, are you ok John?’, I fainted again. Luckily, all was ok, though I felt like a proper wally. I still have no idea who Gavin was. The vaccine was rearranged to another day. 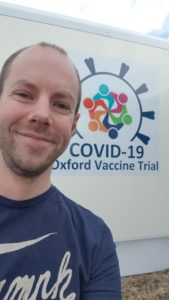 The vaccine
29th April and the day of the vaccine. Basic checks, then vaccine. That was the plan.

I arrived, had the blood pressure and heart rate check and both stats showed that I had been running a marathon. I was nervous. I wasn’t reluctant, but I was nervous because I was totally out of control of everything. While all I had to do was sit in a chair and get stuck with a needle, there was always a risk that something could go wrong, and it was all in the hands of others. Naturally, if something were to happen there would be no better place to be, but that’s not much solace when clinical environments remind you of childhood visits to relatives who end up not coming home from hospitals. Eventually I get a seat outside of the vaccination room.

I’m escorted in to meet the masked medical person and I take a seat. It wobbles a bit. Part of my mind wants to fold up a piece of paper, or shuffle it around the room to stop it wobbling. The other part is reminded of the more pressing matter of the guy who’s about to stick a metal tube into my arm. Opening with a good bedside manner he talks about Marvel films and his thoughts of the recent run of movies. I start to share some basic thoughts as I know this is a distraction technique. And with that the vaccine was done. Zero pain. Zero discomfort. Off to a waiting room to see if I needed to be emergency airlifted to hospital.
I didn’t.
I was fine.
I watched a short video about how to complete the e-diary.
That’s right, for the first 7 days I had to monitor any changes at the point of the vaccine and my temperature, plus any general malaise. I noted to the medical student who mentioned the word ‘malaise’ that we should try and bring it back into more regular use. For data gathering I received a little plastic wallet including a measuring tape and a thermometer. The stats would be entered into an online diary. Then, any feelings of being unwell or taking any medications would be recorded for three weeks. From the start, a weekly survey would be completed to monitor general health and whether you or anyone you had been in touch with had been unwell with COVID symptoms. A data-collectors dream!

The blood visits
Excitingly, each scheduled visit was given a vaguely militaristic designation of D-X. So, vaccine day was D0. I would have follow-up visits on D3, D7, D14, D28, D56, D182 and if I wanted to, on D364. Each session would be a temperature check, heart rate, blood pressure, then blood sample. Each and every time my heart rate and blood pressure were high. Post-blood sample, they were fine.

The experience
It has been a peculiar experience. I remember after the vaccine visit looking at people walking in the sunshine as I drove home, thinking “what I’m doing might help them, and perhaps they have no idea that the study is actually going on”. It made me wonder about the other ‘unknown contributors’ who have had helpful effects in the world. Oddly, I held the other participants in high regard because they had volunteered, but I didn’t have the same view of my own contribution. For me I just hoped that the data I could provide would be helpful for whomever was reviewing the outputs, and hopefully determine success or failure quickly so that an alternative route could be found, or the accelerator could be pressed.

It was also strange that for something that could have genuinely global impact, there was no sense of that at the medical centre. All of the staff were very polite and professional. But there was no sense of occasion. No fuss. Just get it done. But I suppose for an organisation that specialises in vaccine trials, this was their bread and butter so it goes with the territory.

What next? I still have one more official visit this year, then the optional one for next year.

Oh. And the post-vaccine effects for me?
Absolutely none. I still don’t know whether I had the COVID or Meningitis vaccine, but either way there was no fever, no flu-like symptoms, no cough, no cold. No malaise.

As of 20th July…
“The immune responses that were made following vaccination are exactly the kind of responses that we think might be associated with protection, though we must continue with our rigorous clinical trial programme to confirm whether the responses we have seen are sufficient. Importantly, we saw an even greater immune response in participants who received two doses of the vaccine, indicating that this might be a good strategy for vaccination.
These encouraging results support large scale evaluation of this candidate vaccine in an ongoing Phase III programme, that is still needed to prove the vaccine will protect people from the virus.”
https://covid19vaccinetrial.co.uk/press-updates

Video link of the outcomes so far

You can find out more about the COVID trials here.