Createc and the RAIN team based at the Oxford Robotics Institute (ORI) joined forces to combine Createc’s radiation sensing capabilities with ORI’s mobile robot platforms. They were awarded funding from the RAIN Expansion scheme to do this work. The project was a great success, and has led to further funding and collaborative work. Paul Murcutt, from the ORI, summarises the work below. 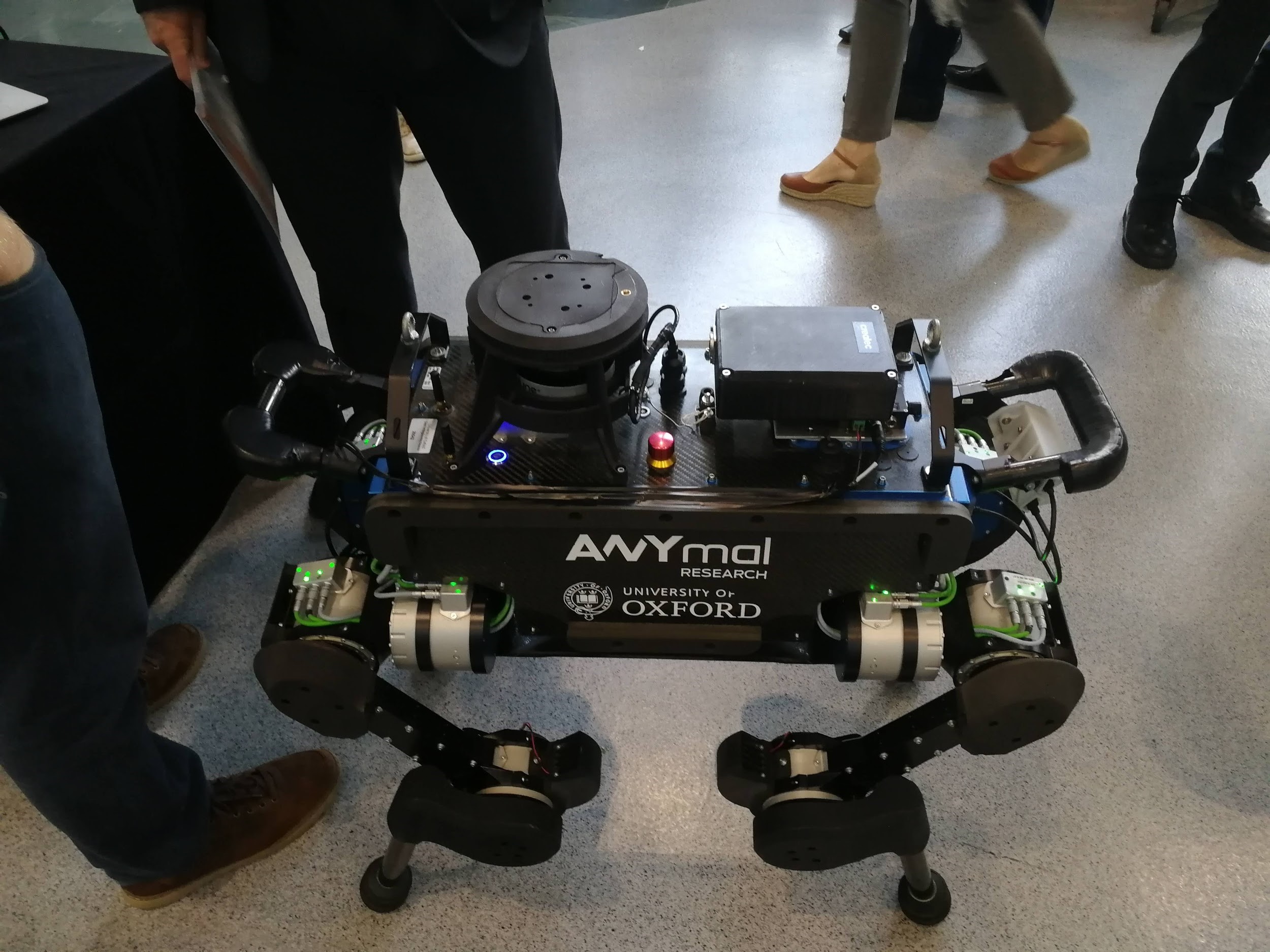 Aims
The project set out to integrate Createc’s handheld RECON system with a number of robotic platforms, allowing for the RECON’s gamma radiation mapping functionality to be realised without exposing people to radiation.

The only hardware component not readily reproducible on robotic platforms was the radiation sensor, thus Createc designed a radiation sensor unit by reconfiguring the existing handheld Recon unit. This sensor was then mounted above a Jackal chassis. The RECON sensor functionality was then transferred over to the Jackal computer & sensors, including containerising the Createc NVisage software stack. Once complete the RECON-Jackal could localise and produce 3D maps using the core NVisage functionality. 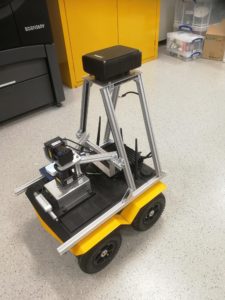 Jackal testing
In order to initially test in the absence of a radioactive source, a simple ‘spoof sensor’ ROS node node was created. The spoof sensor node could reproduce the radiation sensor node’s output based on the distance between the 2 ROS TF frame origins and could also model a collimated sensor. The default settings of this node were configured to mimic the source that would be used in the radioactive trials.

Test setup & location
A fortuitous breakdown of a car lift gave ORI free access to a nearby car park that served as a suitably cluttered and industrial environment for representative testing.
The system performed well in detecting sources when simulating an uncollimated sensor, however when attempting to locate sources with the collimator ‘attached’ the system often failed due to its limited field of view.

Radiation tests
With the cooperation of the University of Oxford Safety Office, ORI were able to coordinate the deployment of the Jackal into a room within the Safety office building and expose it to a 22MBq CS137 source. The source was placed on several surfaces within the room at both collimator height and floor level.

Results
The system performed comparably to the simulated tests, with the same issues in operating the collimated system (restricted FOV).

ANYmal integration
Once the system was proved on the Jackal, integration with the ANYmal quadruped began.

Sensor & Pan unit electromechanical integration
A Zaber pan unit was added to the ANYmal platform in order to increase the speed of which scans could be performed. The ANYmal controller required modification to model the additional loads and intertias introduced by the pan unit, sensor/housing and the collimator.

Software integration
The NVisage system was modified to support the larger pointclouds that ANYmal’s Velodyne VLP16 produced. The ANYmal simulator was updated with the pan unit & sensor. In combination with the spoof radiation sensor node, this permitted initial tests before deploying the NVisage docker onto the ANYmal hardware.

Demonstrations & testing
ANYmal participated in the “Delivering change through robotics at Sellafield” event, jointly hosted by Sellafield GameChangers and RAIN. During the event, ANYmal demonstrated its ability to explore and scan environments to a wealth of Sellafield employees as well as other industry representatives.

‘Cold’ tests
The ANYmal repeated the same tests as the Jackal searching for a source at both ground & collimator level.

Radiation tests
The ANYmal repeated the same tests as the Jackal searching for a source at both ground & collimator level. 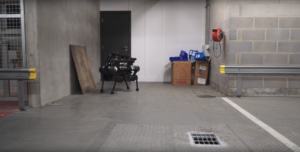 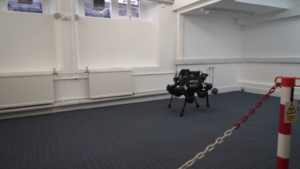 Results were similar to those achieved in simulation and with the spoof radiation source. ANYmal’s increased mobility allowed scan times to be faster when operating in the collimated configuration. The ANYmal was able to locate the source to the same accuracy as the Jackal, although the pointcloud is noisier. This is believed to be due to some minor timing issues, due to the large amount of range data that the VLP16 provides, causing a slightly rotated/translated version of the space around the robot to appear in the integrated map.

Conclusions
This extension project has successfully integrated a Collimated Radiation sensor with the ANYmal quadruped. This work has produced a minimal set of hardware that can leverage the existing mobility, sensors and computing power present on mobile robotic platforms. This system can easily be deployed on multiple robotic platforms. We have demonstrated this system to relevant industry partners and proven this system’s performance in locating dummy sources in a representative industrial environment and radioactive sources in a lab environment.