Written by Helen Bayram on June 3, 2020. Posted in Uncategorized.

RAIN researcher Dr Tilly Alton was seconded to the Oxford Robotics Institute (ORI) at The University of Oxford to work along the RAIN Remote Inspection team there. Read about her experience here.

Robots have been deployed in nuclear environments for many years, but these were typically high-profile incidents such as Chernobyl, or Fukushima Daiichi. The RAIN Hub is developing robots that can be used across more situations, such as routine monitoring, decommissioning and accident recovery. One difficulty in the development of nuclear robotics is that the radiation detectors are seldom designed with robots in mind, instead for desk and lab spaces. This impacts not only hardware choices, mass, size, power requirements etc, but also software. This secondment focused on integrating radiation detectors with the Clearpath Husky robot and Robot Operating System (ROS). 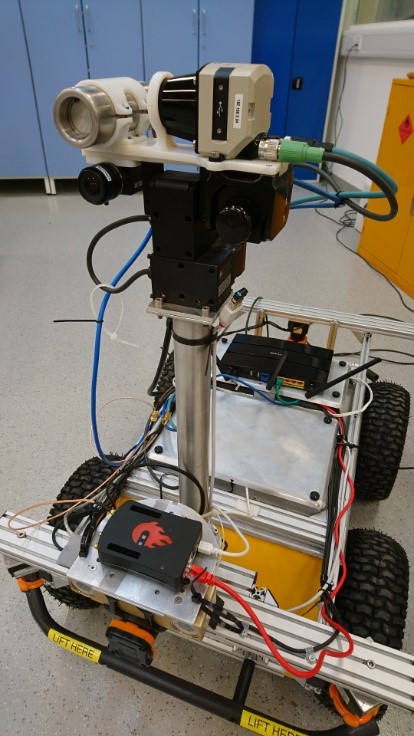 A general advantage in designing the radiation detectors and hardware to be small, light and easy to communicate with is the flexibility, which leads to wider possibilities in robot platforms and potential tasks. One of the detectors used is a cerium bromide (CeBr3), pictured in red above, this is paired with a device to process the detectors output which was developed to be robot compatible (Red Pitaya STEMlab 125-14). The combination of the two provides a detector with great performance that is trivial to mount onto a robot. In this application the CeBr3 detector has been placed into a cylinder of lead to exclude the radiation from the sides and back, this means it only measures the radiation from where it is looking. The other radiation detector was sodium iodide (NaI:Tl), also used for gamma-ray detection. The advantage of this NaI:Tl detector is that it is much more sensitive than the compact CeBr3. The detectors were calibrated and setup to be plug-&-play with the robot, minimising the extra demand on the robot operator.

The CeBr3 inside the lead cylinder was coupled with a laser (LiDAR) that is used to measure distance, when this laser is scanned around the environment it can create a 3D map of where the robot is, this 3D map is then coloured to show radiation intensity. At the end of the secondment a team from ORI and Dr. Tilly Alton made a successful visit to a low-level nuclear waste drum store to test the robot and detectors. Both detectors worked as expected and the CeBr3 with LiDAR was able to produce several quick maps of the radiation. Progress with the detectors and Red Pitaya is ongoing with further refinement of software and a new, more precise lead cylinder.

You can find out more about which cookies we are using or switch them off in settings.

This website uses cookies so that we can provide you with the best user experience possible. Cookie information is stored in your browser and performs functions such as recognising you when you return to our website and helping our team to understand which sections of the website you find most interesting and useful.

Strictly Necessary Cookie should be enabled at all times so that we can save your preferences for cookie settings.

lang  -  Remembers the user's selected language version of a website

This website uses Google Analytics to collect anonymous information such as the number of visitors to the site, and the most popular pages.

If you disable this cookie, we will not be able to save your preferences. This means that every time you visit this website you will need to enable or disable cookies again.

This website uses Google Analytics to collect anonymous information such as the number of visitors to the site, and the most popular pages.

Please enable Strictly Necessary Cookies first so that we can save your preferences!