In October 2018, a team from the University of Bristol ventured to Japan. This was led by RAIN researchers Professor Tom Scott and Dr Yannick Verbelen, with Dr Chris Hutson and PhD student Dean Connor.

Flying first to Osaka for a visit to collaboration partners at the Kyoto University Research Reactor Institute (KURRI). Whilst at KURRI the team conducted a successful calibration test of their novel high-dose diamond gamma dose detector in the Co-60 irradiator there as well as touring the 1 MW test reactor and discuss robotics and sensor applications (and irradiation testing). Uniquely the team had the opportunity to stand on the top of the reactor whilst it was operating and look down a standpipe and through several metres of water to see the eerie blue glow of the Cherenkov radiation coming from the reactor core. 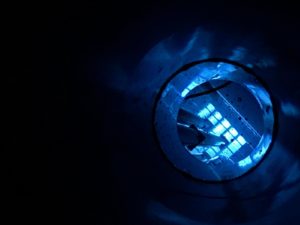 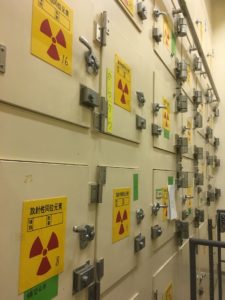 The team then travelled on, via bullet train, to Tokyo and then by hire-car (van) up to Tomioka town, the location of JAEA’s Centre for Collaborative Advanced Decommissioning Studies (CLADS). The team worked with the JAEA and Professor Yosuke Yamashiki from Kyoto University to successfully conduct some UAV-based radiation mapping in the Fukushima restricted zone. The surveys were focused on mapping interim nuclear waste bag storage sites to determine the evolving intensity and distribution of radiation. Surveys of some sites were conducted without ever physically stepping foot on the site – the UAVs with all their sensory payloads did all the heavy lifting! 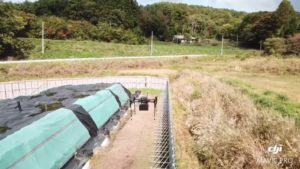 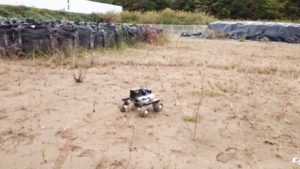 To top off the trip, the team’s final adventure was the ascent of Mount Adatara, a quasi-dormant volcano 1800m high, located within sight of Fukushima City. The assault on the summit was not only to test their strength, bravery and steely determination (they took a cable car at least half the way up) but to conduct an active test of their extreme environment ‘Dragon Egg’ sensor pods. Designed by Dr Yannick Verbelen in association with the EPSRC ASPIRE project (Scott as PI), the low-power sensor pods were designed to automatically record and transmit temperature, humidity, orientation and global positioning data every 20 minutes as well as being triggered to record further data during any seismic event, initiated by a tiny piezoelectric cantilever. Four devices were range tested using a mobile base station both inside the volcano rim and then outwards away from the volcano, achieving a successful transmission range of 15km using LoRA. This was a significant result, and allows a future trip to install a series of ‘Egg’s for a 6-12 month period to provide unprecedented monitoring capability.

Why climb a volcano for a nuclear robotics project you may ask? The answer is simple. Firstly a periodically erupting volcano is the closest analogue for an exploding nuclear reactor; it has the hot debris plume containing solid materials as well as noxious gases making it unfit for humans to get close. Secondly, as extreme environments in their own right, we can use active volcanoes to test Beyond Visual Line Of Sight (BVLOS) flying of UAVs for plume monitoring and sampling, volume change measurements via photogrammetry and even for deploying sensors such as the Dragon Eggs. In the event of a nuclear disaster we’d want to use the same capability to get a ‘first look’ at the extent of any damage, to track and maybe sample any radioactive plume and certainly to rapidly install a radiation sensing network by dropping off sensors in strategic locations.

Innovation and translation are exactly what the RAIN hub is trying to foster, with the Dragon Eggs project an excellent example of challenge led research which is also just that little bit exciting – after all, who wouldn’t want to stand on the rim of a volcano at 1800m testing robots and sensors?!